This feature is introduced to allow, for instance, a student being bullied to block other users sending abusive messages.

For example, when the student Alejandra blocks her classmate Brian, they can no longer send messages to each other.

This option to block messages is available in 1-1 conversations: 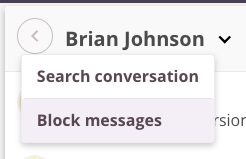 The 1-1 conversation with Brian will now have the following text 'Messages from Brian are blocked' with an 'Unblock' option  where the input-field usually is:

For Brian, the conversation looks normal at first glance, but when trying to send a message, the following message 'Alejandra is not available' appears as shown in the image below:

Brian can still send messages in other conversations (groups, courses, projects) where both he and Alejandra participate, it is only the 1-1 conversation that is affected.